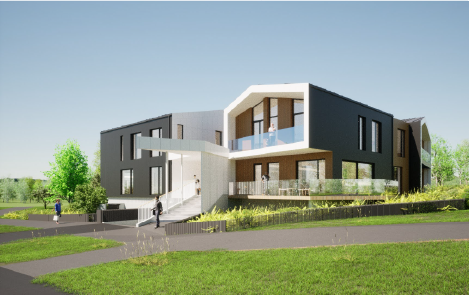 Arco Vara signed a building contract with Combicon construction company to start building new luxury homes in Pirita. Construction works for the unique building will begin already in March, and for the first time, the opportunity to purchase apartments will be first given to the developer’s own investors.

The building with unique architecture will only have five apartments and according to the agreement, it will be completed in the first quarter of next year. “The boutique building on Lehiku road will be a terraced house by its nature, but instead of apartments being located next to each other in a row, they’re rather in a cluster, ensuring better sunlight access for all homes,” explained Miko Niinemäe, the CEO of Arco Vara. According to him, Combicon’s great designing experience was in favor of choosing them as a construction partner. “During the next two months, the design of the building will be completed, and works on the construction site will already begin in March,” he added.

The sale of Kuldlehe apartments is planned differently than usual because, for the first time, the company’s own investors have an exclusive opportunity to purchase homes in the building before the public offering starts. “The public sale is planned for March, but unlike previously, until the Independence Day of Estonia, the apartments will be offered only to the holders of Arco Vara shares and bonds,” said the CEO. “Although it is not a standard practice, it expresses our desire to give our investors an advantage when purchasing a home,” added Niinemäe. The average price of the apartments will be approximately 6,000 euros per square meter and the expected sales revenue is 4.3 million euros.

“Homes in the boutique house are meant for a specific target group – families, who want the comforts of a private residence, but still prefer an apartment,” said Niinemäe. “The goal of our development projects is not to achieve the maximum number of apartments, but to create living environments where we would like to live ourselves, and the particular Pirita development matches this concept. The coziness remains, and at the same time, the home is located within the city border,” added the CEO. The building, surrounded by greenery from two sides, is mainly neighbored by private residences or terraced houses.

The 160-190 square meter homes will have two floors, and in addition to a high-quality construction solution, there will be a modern and luxurious interior. “Each four-bedroom apartment will have walk-in wardrobes, three baths, and a sauna. All homes include a spacious terrace and a balcony on the second floor,” said Niinemäe. According to him, in this special building, heating is based on natural gas, solar panels are installed on the building, underground parking for cars and bicycles is provided for all residents, and even a robotic lawn mower is in the yard.

In addition to the Kuldlehe boutique building, this year Arco Vara continues developing the Kodulahe area and plans to further increase the development volumes. Construction works are taking place in Kodulahe and Pirita, and in Bulgaria, the development of private residences will continue near Sofia. “We believe that in the second half of the year, we will see a recovery in a number of real estate transactions, but we do not predict an increase in prices at the moment,” said Niinemäe.